Detachable penises and the argonauts who love them.

The male Argonaut is an insignificant shell-less creature, fond of retirement, solitary and rarely seen.  When the tender passion seizes him, as he rocks on some sunny wavelet, far from female society, he does not go in search of a wife, but with Spartan courage, detaches one of his eight hands (or arms) and consigns it to the deep, in the hope that some tender hearted individual of the other sex will fall in with it and take it under her protection.
Dall, W.H. (1869). Notes on the argonaut. The American Naturalist, 3(5), 236-239. 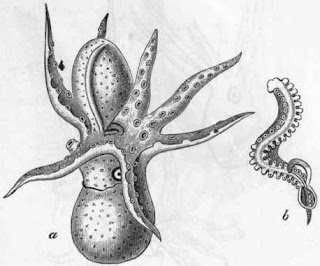 Diagram of the male argonaut; a is the octopus, b is the hectocotylus.
Nicholson, H.A. (1880). Manual of zoology. St Andrews, Scotland, UK: William Blackwood And Sons.
One subject that is always of interest to me is the sheer diversity and gory details of the many reproductive practices found in nature*.  That (and winter recess) is what brings this entry to this evening: the semi-autonomous phallus of the argonaut. 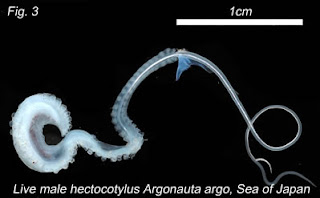 "Hectocotylus", for our purposes, means "octopus wiener".
Photo: Julian Finn, The Malacologist
However, after briefly consulting a few sources, I thought it might be a good idea to introduce my readership to the argonaut itself, as opposed to merely its PHABULOUS PHALLUS.  When we think of cephalopods (which I hope you do several times per day), most people think of octopus and squid, possibly cuttlefish too if they had the misfortune to spend time with me around age six or so.  And while the argonaut is certainly an octopus (it belongs to Order Octopoda) it's a weird octopus and not usually what people envision when they hear the word.  An image will explain what I'm talking about: 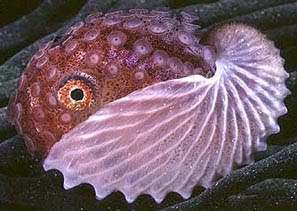 © 1996 David Paul
As you can see, she's riding around in one of the many things that makes argonauts so distinctive, as well as being the source of their nickname, the "paper nautilus": the thin calcium carbonate eggcase of the female.
ACHTUNG
They are not nautiluses, nautiluses belong to an entirely different order (Nautilida, to the shock of nobody) and their shells are quite different than those of the argonaut.  The government of Australia has even prepared a handy and user-friendly argonaut vs. nautilus comparison chart so that you'll have the resources you need when push comes to shove in those high-stakes cephalopod knowledge duels.
ALSO NOTE: In looking for information for this post I've seen many posts that say that they are "closely related to octopuses".  This is not actually true, given they ARE IN FACT octopuses.  Octopoda is a very diverse order that I intend to post more about in the future because I am mildly obsessed with cephalopods in case you missed the note; argonauts are not the strangest of the order.  Wait until we get to some of the more obscure orders under Cephalopoda, like Sepiolida, or even hang out with more extinct cephalopods!
The shell/eggcase of the argonaut is created from secretions produced by two of their dorsal arms, which are webbed and feature chromatophores, aka the things that lets cephalopods change colors real good.  Let's have some VISUAL AIDS: 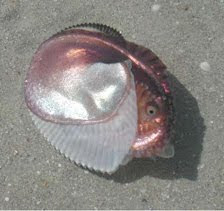 The shiny pink part of the shell are the webbed arms, all splayed out.
These modified arms are particular to the females; the males have their own...modified arm, but that'll come later.  For now, more SCIENCE FACTS ABOUT ARGONAUTS:
-Females can leave and re-enter their shell because they cling to it with their suckers.  This is not the case for nautiluses, who are physically attached to their shells.
-Argonauts do not in fact use their webbed arms as sails by sticking them above the water, although this was apparently a widely-accepted belief back in the day.  You can thank Aristotle for that one, by the way.  While I can't confirm it through experience, supposedly they also exhibit this ability in Jules Verne's 20,000 Leagues Under the Sea.
-Oddly, argonaut shells are not an example of a remnant cephalopod shell, evolutionarily speaking (the vestiges of this shell can be seen in the cuttlebone and the gladius/pen of the squid).  The jury is still out on how the argonaut acquired this ability in terms of evolutionary biology, but what we do know is that the true mollusk shell is formed through an internal shell sac; the argonaut's shell is formed through an entirely different external mechanism, indicating that despite some visual similarities, their magnificent eggcase chariots are evolutionary innovations.

-Continuing on about the shell, most true cephalopod shells are composed of aragonite; the shell of the argonaut is composed of calcite.


-This is probably assumed at this point, but argonauts lay their eggs in their eggcase; most octopuses lay their eggs in strings inside of caves.
-BIG difference between most octopus and argonauts: octopus are benthic, argonauts are pelagic.  Basically, most octopus hang around on the sea floor at varying depths.  Sure, they swim around some, but by and large they live on the floor.  Argonauts, on the other hand, live in the open ocean, relatively near to the surface.
This also means that they are much more difficult to study because of the sheer lack of availability.  Contrast this with this octopus wandering between tide pools like it ain't no thang.  There will occasionally be mass strandings, which shell collectors often enjoy.  Like many other cephalopods they keep poorly in captivity, which doesn't really help the situation.


-The word for argonaut in Japanese is "蛸船" (takobune）, which literally means "octopus boat".  This is an absurdly cute name.
Now let's talk about ARGONAUT SEX.  Argonauts exhibit significant sexual dimorphism, i.e. females are WAY bigger than the males; males' full growth is about 10% of that of the female of the species.  Males also have the star of this entry, the detachable female-mantle-cavity-seeking hectocotylus.  Unfortunately for male argonauts, they only get to mate once.  I could write all this out, but I'd rather quote (bolded emphasis added by me):

The male argonaut has a modified third left arm that carries and stores sperm. This arm develops in a pouch under the male’s eye until needed for fertilization, at which point it explodes out of its sheath and leaves the body (Nesis, 1977; Iliffe, 1982). The arm attaches to the outside of the female’s mantle via suckers, then autonomously wiggles into the mantle cavity (Nesis, 1977). Originally, this arm was thought to be a parasitic worm and was given the scientific name Hectocotylus, and the modified arm is still called a hectocotylis in octopuses and squids. The detached arm is free-swimming and very active, but it probably cannot seek out females since it lacks a sense of direction (Iliffe, 1982). Upon expulsion of the hectocotylus, the male dies, and the arm, with its threadlike organ to carry and store spermatophores, remains in the female’s mantle cavity until such time as she chooses to fertilize it (Iliffe, 1982; Norman, 2003).

Crudely summarized, the male argonaut's terrifying micro-penis EXPLODES out from under his eye, he dies, penis-arm swims to the female and plops itself into her mantle cavity minus the male who is now just another tiny seven-armed carcass drifting in the sea.  Note that females can:
a) carry a number of sperm packets simultaneously
b) tote the sperm packets around until they decide to fertilize their eggs.
I don't know if argonauts have this ability, but I know some organisms who do the sperm packet thing (cuttlefish, if I'm not mistaken) can decide which sperm packets they want to use.


As mentioned earlier, people most frequently encounter argonauts in as either washed up and dead or just the eggcase alone.  However, occasionally live ones will be encountered on the beach, as demonstrated in this video:

Note how she's jetting water pretty much the whole time and expels ink at 2:26.  At about the same time she wraps her webbed arms around the eggcase, whereas she had them tucked in before.  Hopefully she made it back safely.
REGARDING EGGCASES
The Argonaut shell is formed, curiously enough, by the females only; as among more highly organized beings sometimes, the gentler sex outshine their brothers in the splendor of their apparel, and the extent it occupies. Unlike many, however, the Argonaut toils not, neither does she spin.  Folding her arms about her, in her earliest infancy, she is speedily arrayed in all her glory, and has not shown any discontent at the old fashions since the time of Aristotle.
(Hall, 1869)
I desperately wish that this was how scholarly papers were still written, full of whimsy and random opinions regarding cephalopod aesthetics.  This is why I am quoting resources about argonauts from the 1860s. /TANGENT
I've spent most of this entry talking about the organism itself; however, most people are more interested in the delicate eggcases of the argonaut than the octopus that travels in it.  Argonaut species can differentiated by the types of eggcases they produce.  A gallery of eggcases for sale can be seen here; Wikipedia has a handy comparative chart as well: 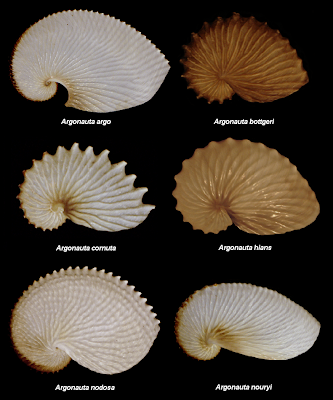 Of course, I'm more interested in the octopus than the shells really, so here's one without her shell.  You can see her webbed arm trailing out behind her: 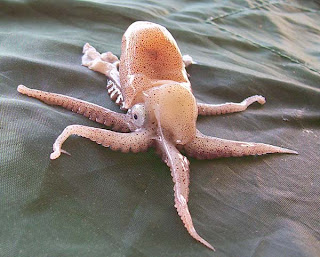 I will leave you with a video of an argonaut in captivity that shows off the chromatophores (color-changing cells) beautifully.  Like most cephalopods in captivity, it is not doing anything particularly exciting, but it's still lovely to observe: 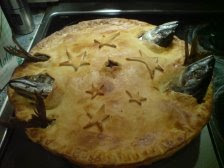 A.
Texas, United States
I'm a TESOL in training/pretend scientist who likes fish, cats and other zoological stuff more.